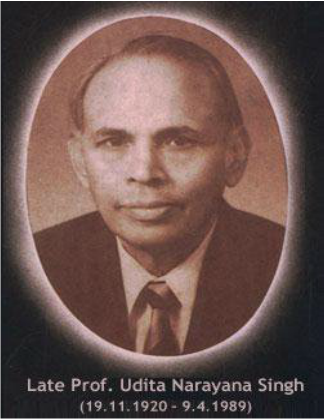 The Indian Society for History of Mathematics was founded by the late Professor Udita Narayana Singh in the year 1978. Professor Singh was born on August 4, 1917 in the District of Varanasi. His early student life and a significant part of his formative years as a mathematician were spent at the Allahabad University, then famed as „Oxford of the East‟. Here, the distinguished analyst B.N. Prasad influenced him and he produced one of the finest doctoral dissertations in mathematics to have ever come out of Allahabad University in 1949. None other than E. C. Titchmarsh, FRS, who called Singh “an extremely talented mathematician”, praised the thesis in superlative terms. U. N. Singh then proceeded to the Sorbonne (University of Paris) where he worked under the guidance of the renowned mathematician Szolem Mandelbrojt and obtained the state D.Sc. with mention „tres honorable‟ in 1954.

An enlightened educationist and mathematician, his contributions are memorable. Numerous honours came his way but he remained the most unassuming of persons. He served with distinction the cause of mathematics and education in numerous capacities. At the time of his untimely death he was on the Madhya Pradesh University Grants Commission where he was instrumental in ushering in a quiet revolution in the higher education set-up of the state. As the Vice Chancellor of the University of Allahabad he was acclaimed as an administrative genius. As Pro-Vice Chancellor of the University of Delhi, and its Vice Chancellor for a time, he was responsible for several innovations that substantially improved the working of several institutions in India.

His work and his life were characterized by an unwavering pursuit of excellence and rectitude. He was responsible for uplifting the standards of the Department of Mathematics at University of Delhi leading to the international standards. His interests were wide and deep. His profound knowledge of Sanskrit, of the Vedas and of Indian philosophy and culture helped him in having a deep understanding and appreciation of Ancient Indian Mathematics. He foresaw the need and importance to accord the History of Mathematics-in particular the history of Indian mathematics-its rightful place in the context of the country‟s growth and development. As founder President of the Indian Society for History of Mathematics, he took keen interest in its growth and development. It is a fitting tribute to him that Gaņita Bhāratī – the Bulletin of the Society – is today among the leading international journals on the history of mathematics. The Society feels honored in carrying out his legacy beyond 30 years.

It may be in order to mention that the Genius father produced a Genius son in Professor Dinesh Singh, who is currently the Vice Chancellor of the University of Delhi and a name in mathematics on his own.